Book Review of the Month: 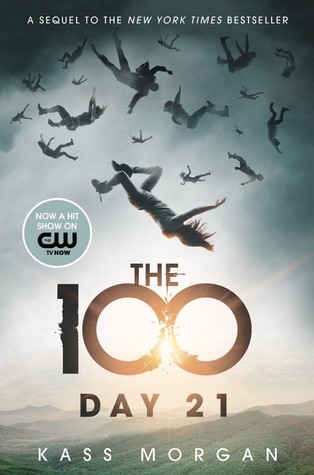 No one has set foot on Earth in centuries — until now.
It’s been 21 days since the hundred landed on Earth. They’re the only humans to set foot on the planet in centuries…or so they thought. Facing an unknown enemy, Wells attempts to keep the group together. Clarke strikes out for Mount Weather, in search of other Colonists, while Bellamy is determined to rescue his sister, no matter the cost. And back on the ship, Glass faces an unthinkable choice between the love of her life and life itself.

In this pulse-pounding sequel to Kass Morgan’s The 100, secrets are revealed, beliefs are challenged, and relationships are tested. And the hundred will struggle to survive the only way they can — together.

In case you haven’t read the first book in the series, ‘The Hundred’, (which I highly recommend), I want to inform you that this book is written in multi-character third person with partial insight into what the narrating character is thinking, also known as limited point of view.

The book’s told from the perspectives of Clarke, Wells, Bellamy, and Glass in alternating fashion. This is both a pro and a con depending on which of the voices the reader enjoys. Even so, Kass Morgan doesn’t write each of the characters in their own voice, but rather from a more objective third-person narration with hints into what the characters are thinking. This allows for symmetry in the voices. The symmetry doesn’t jostle the reader in the way a first person narration would when switching between characters.

Pacing: This book is extremely quick. The entire book happens in a matter of a few days, made possible because of the multiple viewpoints. In the course of just those few days, a lot happens. It enables the reader to constantly stay engaged because while some characters are twiddling their thumbs for a few hours, other characters are in the middle of something mind-blowing. It’s this energy that comes across in the book. Each scene, each glimpse into a character’s life, is exciting. Something’s always happening. Something important, which pushes the plot along and keeps the reader wondering what will happen next, especially in a world that we know so little about.

World: The world of this series is spectacular! It takes place on Earth hundreds of years in the future after a nuclear war supposedly eradicated all inhabitants. However, we quickly learn that’s not true. Even so, the creatures and plant life now living on the planet are much different from their pre-war counterparts due to nuclear radiation and the possible dangers of each and every thing simply enhances the excitement. We have no idea what’ll pop up next. More importantly, we don’t know what seemingly innocent item could turn out to be the group’s worst nightmare.

Characters: As previously stated the book’s told from the perspectives of Clarke, Bellamy, Wells, and Glass.

Clarke and Bellamy consistently have an on-again, off-again relationship, which is cute and I personally love the two together(totally biased because I ship them in the show as well, which I saw before reading the book :p). However, with Bellamy’s constant need to find his sister he tends to bounce back and forth between his affection for Clarke and his drive to protect Octavia. It gives the impression that Bellamy’s only capable of one emotion at a time. Frankly, that kind of bugged me. I wanted to see more depth in his character and more struggle internally over which one was more important to him. However, he’s never forced to make such a decision because Clarke ends up accompanying him to find his sister, at which time he forgives Clarke for her indiscretions and they kind of live happily ever after… (Still love the two together. >.>)

Wells, on the other hand, gives the reader lots of insight to his thoughts, his feelings, his fascinations with Earth, and yet I didn’t connect with him. I didn’t truly feel his emotional-struggle. I didn’t understand his need to constantly impress his father, a man who cared more about the people as a whole than about his own family. This became especially confusing to me when it came to light that his father had lied to him for some time about rather grave topics. The emotional connection between father and son didn’t make sense, other than the fact that Jaha is the only parent Wells has left.
Additionally, Wells’s conflict over whether or not be leader, and how to go about helping the group, doesn’t seem quite powerful enough, either that or his military training taught him to seriously temper even his inner thoughts.
As a side note, I kind of hate him. Not because of how he’s written necessarily, but because of the terrible things he does for his own selfish desires, i.e. burning the only tree on the Colony, damaging the airlock and risking thousands of lives just so Clarke could be sent to Earth. Yeah, he irks me. I was kind of hoping that he’d follow his TV version’s fate, but that has yet to happen. (Not surprising given the many differences between the book and the show, making the book a constant surprise). In fact, I dislike Wells enough to not even be happy for him when he ends up with Sasha. I just… don’t care.

Then we have Glass, the girl left on the Colony after escaping the drop ship in book one, which was supposed to take her to the ground like the rest of the hundred convicted teenagers. She gives us insight into what’s going on in space. Unfortunately, she was another character I didn’t attach with. She’s a strong girl, forced to be so given the circumstances that make up her background, but she never truly seems real to me. It almost seemed as though she kind of avoids life and reality, like she’s still a silly Phoenician girl. To be honest, I think I could’ve done without her viewpoint, especially in this second book, but I do like the insight that she gives us into what’s going on in the Colony. Her struggles just seemed superficial, especially in the artificial way that she went about solving them…

Plot: I enjoyed the plot of this sequel. The overarching plot of trying to survive in a hostile world is broken down into sub-plots for each character, establishing what’s most important to them. For some of them, there was a debate about what was most important. Additionally, sometimes their desires were overpowering. It pushed them to do things that might not have been the best for everyone, which is extremely realistic. That’s what I loved. The fear, the drive, the curiosity, was all real.

Then, there was the revelation that there were two factions of Earthborns, one trying to kill the colonists, the other trying to help them. This is great because each one plays a role. The rogue faction plays the role of the main antagonist against all of the colonists and the other faction can act as a mentor, once they revealed that there really is another faction. Even so, I have to say I’m a bit worried. The friendly faction says they’ll help as long as the colonists stay friendly, but, as plainly painted, Graham’s anything but friendly. Even if he does, I’m not sure I truly believe the faction of Earthborns are friendly. Their interactions with Clarke and Bellamy seemed forced, fake, as if they were trying to get on their good side. Curious…

The end of the book left me wondering about a lot of things: would the other drop ships make it to the ground in one piece? Will Clarke find her parents? Though, mainly, I’m wondering about the group as a whole if Graham doesn’t keep himself in line. He’s the antagonizer within the group and given his reckless and rash behavior, I think it’s only a matter of time before he does something stupid either to Octavia, to the colonists, to the rogue faction, or to the friendly faction. I get this feeling he will play a bigger role in book three. For now, though, I leave my rating for ‘Day 21’, book two of ‘The Hundred’, at four stars.