Note: REUTS Publication sent me this e-book via Netgalley for free in exchange for my honest review.

In Earth’s battle-ridden future, humans have evolved. Those with extraordinary skills rise to power and fame. Those without live in poverty.

Sixteen-year-old Willow Kent believed she was normal. But when a genetically-advanced military officer shows up in her village and questions her identity, long-buried secrets begin to emerge. With remarkable skills and a shocking genetic code the Core and its enemies will do anything to obtain, Willow suddenly finds the freedom she craves slipping through her fingers. Greed, corruption, and genetic tampering threaten every aspect of her existence as she’s thrust, unwilling, into the sophisticated culture of the elite Core city. To ensure peace, she must leave the past behind, marry a man she’s never met, and submit to the authority of a relentless officer with a hidden agenda of his own.

Her life has become a dangerous game. How much will she sacrifice in order to win?

‘Gambit’ is written in first person past tense with the narrator being Willow Kent. While Willow(Will) is only sixteen years old she has a strong voice, a good understanding of what she wants, and the ability to learn quickly. Her voice develops smoothly. It reflects her interactions with the world and the people around her in a very realistic and still somewhat child-like way.

Pacing: This novel moves quickly. Most of the book takes place in a matter of a few days with lots of character interaction, world-development, and reveals. This quick pace draws the reader in. From there the speed slows down, but never does it lull. It continues at a quick pace. There’s always something pushing the plot along instead of dull, uninteresting, seemingly unimportant scenes. Every scene has importance and each scene reveals something to the reader.

World: The world of Gambit starts off with a historical fiction air, but quickly transforms into a futuristic dystopian world with a separation in societal castes, advanced technology, and the debate of ethics that comes along with the technology. Even so, the book does not rely on the world, nor use it as a smokescreen, to hide a plot. Instead, it molds together with the plot, utilizing it to enhance the story as a whole.

Writing: This book, while meant for young adults, is written in a sophisticated style. The character interactions are realistic with enough tension to put the reader on edge while the time jumps are written in a way as to make them smooth and not distract from the story itself. Additionally, the story is not written in a way as to shock readers. Much of what happens is expected, yet it lacks the overly obvious cliché surprise factor, which normally leaves many readers feeling underwhelmed. The writing strays from that cliché. The hints lead up to the reveals, giving them less emphasis and creating a smooth line of events that keeps the reader engaged.

Character: Teenagers can be annoying perspectives to read from what with their incapability of handling their emotions and the amount of turmoil and angst that generally inhabits them. Even so, Willow is wonderful. Her turmoil is there. Her uncertainty is there. She constantly has a battle raging inside about what she’s supposed to be doing, what’s right, what’s wrong, and trying to figure where she fits into her new world. However, she takes them all in stride. She grows and learns to understand the world and makes compromises that define who she is and who she will allow herself to become.

Non-Spoilered Plot: While the plot is one told many a times before, the unique world, the exquisite writing style and the strong voice of the main character, Willow Kent, fuse together to form an age-old tale that feels brand new. Aiding this fuse is a mixture of action scenes, well-written and believable characters, high intensity character interactions, a constant source of intrigue, and an abundance in revealed secrets. All of it keeps the reader guessing and craving for more.

Plot: The overarching plot of this novel is that Willow Kent was switched at birth in order to keep her safe and now she is being forced back into the rich and luxurious life she was meant to have, whether she wants it or not. This, in itself, is a rather common plot. However, Willow’s strong beliefs and voice give this age-old tale a fresh feeling.

Right from the get go Willow’s driving factor is her desire for freedom above all else. Even so, she sacrifices her freedom to protect the family and friends she loves when a military commander threatens their lives if she refuses to accompany him back to the Core. This is our first glimpse of Willow’s fire. She boldly stands up to the commander, attacks him, and does whatever she can to stay true to herself and maintain her freedom. Though, the battle to do so becomes even more difficult when she leaves the only place she’s ever called home.

The Core, it turns out, is a place with advanced technology and her birth parents are the type to never want for anything what with their connections and wealth. However, even in a luxurious place where Willow should never want for anything, she loses the only thing she craves: freedom. Her life becomes a flurry of training and appointments. Everyone wants to iron out the person she is and mold her into the person they want her to be: refined, poised, and courteous. All so that she can make a good impression on her betrothed-from-birth.

This advantageous marriage, and the genetically superior offspring that would result from it, often times seems to be the only reason her birth parents wanted Willow back in the first place. They care about her safety in a way that deems her property. She can’t leave the center. She can’t come in contact with anyone without approval and she must have a sweeper with her where ever she goes. (A sweeper is a person with the ability to detect particles that carry DNA so as not to leave hair, skin, or other bodily remnants behind.)

To make matters worse, the gruff and forceful commander that stole her from her home is the head of her security detail in the Core, and while no one is allowed to touch or harm her, he is exempt from said contract. Though, it is this exemption that emboldens him. Already allowed to attack and fight her physically as is designated by his status as her defense instructor, her fiery personality draws him towards her in a way that a man is attracted to a woman.

This passion he has for her is unlike anything Willow’s ever faced. It rocks her sturdy base. It sends her into a whirlwind of confusion, which ignites another part of her, a part known as the tiger. The tiger craves commander Reece. Yet, the butterfly, her innocence, knows how wrong it is to be with him and it fights the tiger at every turn until infatuation leads to dangerous consequences.

With Reece blinded by his feelings for Willow he puts her life in harm’s way, almost forfeiting her to the rebel forces that would gladly kill her and steal her DNA for their own selfish purposes. Even so, he manages to save her life. Though, he does so at the cost of fueling her tiger, a tiger which proves to be more than her strength. It’s also her darkness. Now that the darkness is awakened, Willow succumbs to it, falling into the game of chess played within the Core by blackmailing her birth mother, utilizing the power she holds as her mother’s daughter, and willingly entering into a forbidden relationship with Reece, the head of her security. This ending, while not the cliffhanger I’m used to, is glorious because it unveils the character growth and the opens the possibilities of what is to come in book two. For that I leave my rating for ‘Gambit’ at five stars. 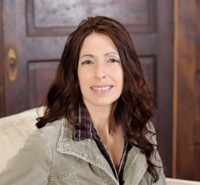 C.L. Denault is a speculative fiction writer who loves dreaming up tales of adventure and intrigue. A former systems analyst, she gave up her nerdy code-writing skills to stay home with her children (including a son with special needs), and currently lives among the vast stretches of cornfields in Illinois.

Writing and blogging are two of her passions, along with drinking coffee and watching sci-fi and horror flicks. When she’s not hanging out with her family, she can usually be found at a library or tucked away in the shadowy corner of a hip coffeehouse. She’s also been glimpsed sneaking into her garage, late at night, to work on her time machine.

She enjoys connecting with people (especially those from other planets, dimensions, and the future). To find her, just visit her website or The INFJ Café. Or use a Stargate. Whichever is easiest.