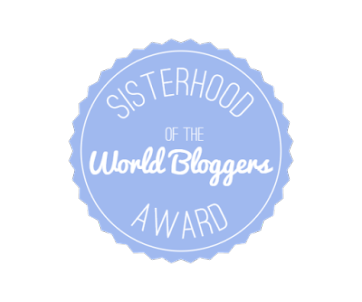 The outstanding Olivia over at Brewing Up Books nominated me for the Sisterhood of the World Blogger Award! I have been previously nominated for this award, but even so, I love it! The questions are different and, for that reason, I will be doing it again! Yay!

Rules
🍁Thank the blogger who nominated you, linking back to their site.
🍁Put the award logo on your blog.
🍁Answer the ten questions sent to you.
🍁Make up ten new questions for your nominees to answer.
🍁Nominate ten blogs.

1. Do you listen to music while reading?
No! I can’t listen to anything when I’m reading, particularly music because it’s such a powerful force for me that it distracts me. However, most noise distracts me. (Odd given that I’m not an auditory learner… >.>) Anyway, no. I need silence when I read. It allows me to best disappear into and absorb the book.

2. What is your favorite book that you’ve read for school?  Least favorite?
My least favorite book that I read for school was anything, and everything, ever written by Edgar Allen Poe. I detest his work. (Oddly enough, I’ve been told that my dark writing style is similar to his works. Irony, I suppose.) However, I almost failed my eighth grade English class because I refused to read his works.

As far as my favorite book that I was required to read for school… Hm… that’s a tough one. A lot of the literature chosen for school wasn’t very good. Though, I did quite enjoy my British Literature class in which we read Shakespeare, Great Expectations, and Canterbury Tales. I enjoyed the raunchy language Canterbury Tales because it was so unique and different. It made it fun to read.

3. How did you discover the blogosphere?
I discovered the blogosphere rather recently. I mean, I’ve always known that people had blogs and it always seemed like quite the fascinating concept to have a blog and post stuff (not that I ever had any idea what exactly I wanted to blog about). However, it wasn’t until I seriously looked into publishing a book that I really discovered it. It’s a good way to gain exposure and interact with other readers and writers and it’s for my love of books that I joined the blogosphere.

4. Do you have any signed editions of books?  If so, which ones?

A few years ago my answer would’ve been ‘no’. However, Kiera Cass happened to come to my hometown a few years back and I just couldn’t resist meeting her and having her sign my copies of ‘The Selection’ and ‘The Elite’, as I was super wrapped up in the series at the time. Additionally, I’d never been to an author signing. It was tons of fun!

5. What three books would you like to see made into movies or TV series?
This is a really tough question, especially because there have been such poor adaptations of books lately, in my opinion. For that reason I don’t want to condemn any good book to a bad adaptation. It gives the non-reading world such a bad image of the book and the genre and that’s always really disappointing. Not to mention, I don’t want to be disappointed myself. :p

However, if I were to pick ones and know they would be made well I would pick ‘Delirium’ by Lauren Oliver, which was almost made into a TV show, but it was never played on air. ‘Gambit’ by C. L. Denault, which is a brand new book and it’s amazing! Lastly, I would pick ‘Uglies’ because I would personally LOVE to see how they would differentiate ‘uglies’ from ‘pretties’ and make it a ‘universal’ thing. That would be fascinating!

Not many books attempt to use time travel nowadays and understandable so since it is quite the difficult phenomenon to master writing about. Even so, this book sounds quite interesting. I also like that the synopsis makes the main character sound less like our typical heroine. Having a unique heroine in YA would be very nice.

7. Do you tend to borrow books from the library or purchase them?
Okay! Don’t judge me, but I can’t borrow library books. I have a terrible quirk. Whenever I touch a used book my skin crawls. I hate the yellowed pages, the worn cover, the bent pages, the broken spine, the fact that someone else has read it before me. I can’t help it. I have never been able to get over this and for that reason I buy my books. I like having my own copies that are fresh, pristine, and, well… perfect.

8. How do you organize your bookshelf?
The top-tier of bookshelf organization for me is size. The smallest books go on top and the biggest, heaviest books on bottom(so the shelf doesn’t tip over). It’s for this reason that I like all the books from one series to be in the same format so they can all look uniform on the shelf. (It really bugs me when I have a mixture of hardbacks and papers in one series. -.-) Additionally, all the books on a single shelf must either match in height or descend perfectly in height. No jagged lines allowed! (Yes, I’m very precise about my bookshelf organization.) I would show a picture, but sadly my shelf is in a plastic, storage box because I’ve been moving so much lately. *Sigh* Can’t wait to get it out and set up again! Fall 2016!

The longest book I’ve read would probably be ‘Harry Potter and The Order of the Phoenix.’ I don’t generally read in adult genres, and YA books are shorter, except for HP. It’s an outlier and I have read all of them. Though, I was sorely disappointed with five as I didn’t feel very much happened and it was too much teen angst for me to enjoy it. Sorry to break everyone’s hearts.

The longest book that’s currently on my TBR is actually ‘A Clash of Kings’ by George R. R. Martin, which is the second book in ‘A Song of Ice and Fire’ series. It’s been on my TBR list for far too long. It’s also been sitting on my nightstand for some time and I quite frankly believe it’s the length that has deterred me from reading it thus far. It will be a commitment. I love the series and the world building and really want to read it, but I just keep thinking about all the other, shorter books I could get through in the same amount of time. *sigh* One day.

10. Favorite fictional creature?
Favorite fictional creature, huh? Wow. There are so many to choose from, but to be completely honest I have always, and will always, gravitate towards lycans. Not werewolves, because werewolves are cursed and therefore bound to the moon and forced to painfully change into monsters around the three days of the full moon. (At least, that’s the lore, I prefer for werewolves.) Lycans, on the other hand, are born with the ability to shift into a wolf-life creature and, as such, can do so at will. The possibilities for these creatures, based upon their lore, is endless. They are truly my favorite.

As I have previously done this award. I will not be nominating anyone else for this award, unless you would like to be nominated. In which case I’d be more than happy to make up some questions for you and spread the fun around. Just let me know. ^.^