The monuments and memorials aren’t the only things I saw in Hiroshima. Like all sizable Japanese cities, Hiroshima has a castle. :p I didn’t go inside (because I was being lazy and cheap, and because you can’t take pictures inside). However, I did wander through the grounds surrounding the castle.

I never quite get used to seeing the giant moats protecting the castles and the excessively large walls and doorways. It honestly looks like giants made them (which is funny since most Japanese people are quite short. :p) Honestly, the sheer size of the motes, walls, and gates put European castles to shame. Haha! (And Americans don’t even count because we don’t have castles. -.- We’re so lame.)

What I loved most about Hiroshima castle was actually the coloring. Many of the castles I’ve seen in Japan thus far have white walls. They gleam and glow in the sunlight and vanish when the clouds come out. Yet, Hiroshima castle was dark. It looked to be made from wood like American log cabin would be and perhaps that was why I enjoyed looking at it so much (because I felt a connection to home or something), or maybe I just like dark colors. :p Either way, the castle is quite a site to see and taps further into history than the memorials of WWII. 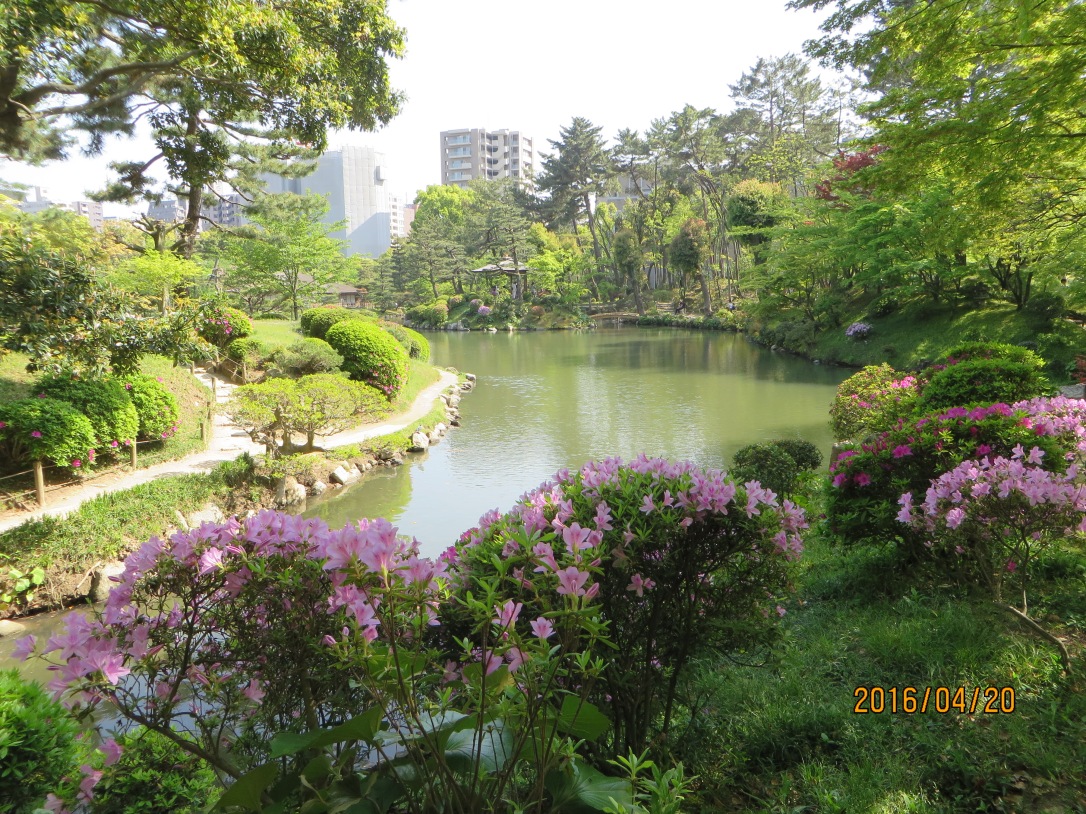 Something that was a little more… *cough* Japanese-size would be Shukkeien garden. This particular garden has dozens of different landscapes seamlessly woven together. It was the designer’s intent to showcase multiple landscapes so one would not have to travel to see them all, but rather would have them accessible here in the garden. At least… that was how I understood it. :p

Either way, it was so gorgeous to walk around and even sit for a while and just enjoy the nature. Unfortunately, it wasn’t that big or sound-proofed and much of the outside city noise leaked in.

It kind of killed the mood a little bit for me since a garden is meant to be a place to get away from the busy chaos and cacophony of the city, but oh well. Gorgeous still with their rhododendrons, peonies, and countless tree species.

And what trip to Hiroshima wouldn’t be complete without trying some traditional Hiroshima-style okonomiyaki! 0.0 *mouth waters* Oh man! This stuff is amazing and they make it right in front of you! In case you missed it, I did a post about okonomiyaki already, but that was from a tent stall at a festival. This was top-grade restaurant-made okonomiyaki and if my stomach were bigger, I would’ve ordered a second one. This was AMAZING! Of course, this one also had bacon on it! Haha!

If you haven’t gotten my hint yet, you should DEFINITELY try onomoiyaki if you ever go to Japan and then try it again in Hiroshima. :p

Have you ever been to Hiroshima? Tell me about your experience in the comments below!