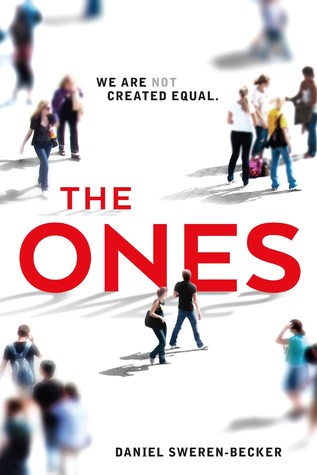 THE ONES
by Daniel Sweren-Becker

I received this free ebook from the publisher via Netgalley in exchange for my honest review.

Cody has always been proud of being a One. She and her boyfriend James were two of the lucky babies from the 1% of the U.S. population that were randomly selected to benefit from genetic engineering. Now, she and the rest of The Ones are excelling. They are healthy, beautiful, and talented. They aren’t otherworldly, just perfect. And to some, that’s not fair. The Equality Movement, capitalizing on the growing fear and jealousy, gains political traction and actually outlaws their existence. Society shows its darker side as The Ones are marginalized. The line between right and wrong blurs in the face of injustice and Cody becomes closer to a group of radical Ones intent on fighting back. James begins to fear just how far she is willing to go for the cause.

Wasted Potential
As a grad student working in the genetics field, this book was absolutely fascinating to me. I loved the idea of genetically engineered people. (No, I don’t support it, but I think it’s a great idea for a book.) However, the idea felt less like a plot-point than a background piece of the book and that was very disappointing. My main reason for reading the book was tossed to the side.

Forced Romance
The two main characters, Cody and James, are dating. However, while their romance may have started off as realistic, it dropped off from there. Granted there are a lot of heavy plot points that interact with these characters, forcing them to make difficult decisions, but their love doesn’t feel real. Worst of all, it’s supposed to act as a main plot motivator.

Discontinuity
The story felt disconnected. It was like a bunch of scenes were smushed together into a book, but the line connecting them is so thin it’s almost invisible. As a result, the story reads more as a smattering of events than an actual streamlined story. It wasn’t difficult to follow, just… uninteresting and jarring.