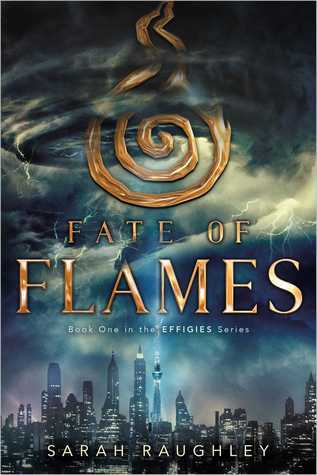 FATE OF FLAMES
by Sarah Raughley

I received this free digital ARC

from the publisher via Netgalley in exchange for my honest review.

Four girls with the power to control the elements and save the world from a terrible evil must come together in the first epic novel in a brand-new series.

When Phantoms—massive beasts made from nightmares and darkness—suddenly appeared and began terrorizing the world, four girls, the Effigies, each gained a unique power to control one of the classical elements: earth, air, fire, and water. Since then, four girls across the world have continually fought against the Phantoms, fulfilling their cosmic duty. And when one Effigy dies, another girl gains her power as a replacement.

But now, with technologies in place to protect the world’s major cities from Phantom attacks, the Effigies have stopped defending humanity and, instead, have become international celebrities, with their heroic feats ranked, televised, and talked about in online fandoms.

Until the day that New York City’s protection against the Phantoms fails, a man seems to be able to control them by sheer force of will, and Maia, a high school student, unexpectedly becomes the Fire Effigy.

Now Maia has been thrown into battle with three girls who want nothing to do with one another. But with the first human villain that the girls have ever faced, and an army of Phantoms preparing for attack, there isn’t much time for the Effigies to learn how to work together.

Can the girls take control of their destinies before the world is destroyed forever?

Dark YA
Here we go again! Just like the last book I reviewed, The Diabolic by S. J. Kincaid, this is a dark YA novel. And I love it! There is death. There is destruction. There are cowards. There are villains. There are broken characters. This book really gets into the darkness within people and the way it changes them and even corrupts them. It’s very realistic in that manner and very dark because of it. For that, I enjoyed this book.

Unique Concept
I quite enjoyed the concept behind the book: magically gifted fighters sent to protect the world from black shadowy monsters. It’s a very dark concept with a dash of advanced scifi tech thrown in. And I liked the basis behind the magic and the way the world was built around it. Though, me with my sciencey brain would have liked more explanation as to how everything worked. :p But that’s the difference between fantasy and scifi. Magic is just magic sometimes. Haha!

Nothing from the MC
I’m sure that the MC, Maia, is relatable to many readers. She’s young, excitable, nervous, and has gone through some serious trauma in her lifetime. However, I never connected with her. I never truly cared about her. To be honest, I would have preferred one of the other characters to have been the MC because they were more dynamic. And maybe that’s why: Maia was a very bland character and it put a bit of a damper on the story.

Lack of Answers
This story was very intricate. There was a lot going on in regards to Maia and within the world around her. That much was obvious throughout the story and kept me wanting the answers. I wanted to know what the villain’s motive was. I wanted to know what everyone’s dark secrets were. Aaaand nothing. -.- There are so few answers provided that it didn’t really feel like there was a conclusion at all. And I understand that this will be a trilogy, and the answers are likely given in the next books, but when so many questions are left unanswered, I find myself wondering if I even want to read the next books.

2 thoughts on “{REVIEW} Fate of Flames by Sarah Raughley”