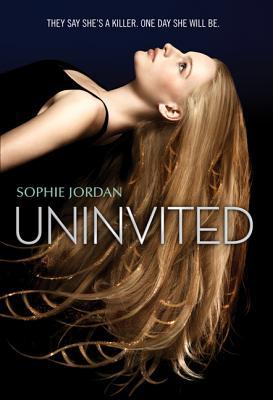 Davy had everything—a terrific boyfriend, the homecoming crown, a bright future at Juilliard—but when her genetic tests come back positive for Homicidal Tendency Syndrome, she loses it all. Uninvited from her prestigious school, avoided by her friends and family, she is placed in a special class with other “carriers” who are treated like the murderers they someday might become.

Only Sean, a fellow HTS carrier, can relate to her new life and tells her that she alone controls her actions—not the code embedded into her DNA. But even if she can learn to trust him, can Davy trust herself?

Genetics!
Ah! Throw me some more science with genetics! Haha! I’m a PhD student researching genetics. So this book was right up my alley and I was truly fascinated with reading it. Why? The controversy and arguments surrounding people with specific genes because genes are not a guarantee of something.

Having a gene for a specific disorder does not guarantee one will have the disorder. Yet, that is how it’s approached by the government and the public in UNINVITED. Anyone positive for the HTS gene was considered dangerous and would inevitably kill someone, which isn’t true(but the public doesn’t always listen to facts). Yet, I loved how both sides of the argument were brought to attention in this story. It made it very realistic.

Terminology
As a graduate student studying genetics, the use of the word ‘carrier’ to refer to the people with HTS gene bothered me. After all, a carrier is someone who has one copy of a gene, but does not express the gene. However, in the book, it was used a means to describe someone who has both copies of the gene (likely recessive) and is expressing the trait linked to that gene. That is not a carrier. This bothered me.

Mirroring Reality
My favorite part about this book is the way it mirrors how people react in reality to something like this. Imagine if a gene was found in humans and had a high correlation with people who commit murder. How many people of the general public would jump at something like this? How many would instantly think all those positive for the gene are bad and criminals?

Be honest with yourself, it would happen. The prejudice and jumping to conclusions and the absolutely extreme measures taken in this book are things that could happen in real life should a gene like this ever be discovered (not that I believe there is such a gene, but there’s a lot we don’t know.) So, yes, I loved how this fiction novel mirrored how people would react in society.