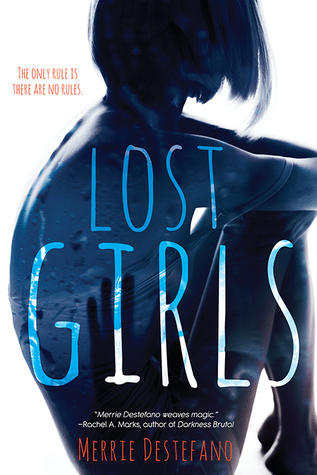 I won this dark, contemporary YA in a giveaway back in January and fell completely and madly in love with it! It’s amazing! Merrie does such an amazing job weaving this story. I was enraptured right from the beginning and glued to the pages until the very end! But you can read more about why I love it in my review or you can watch my review on youtube! Today, though, we’re gonna chat with the wonderfully talented author of Lost Girls,

Hi there, Merrie! Thank you for joining us today. Why don’t we start off with you telling us a little bit about yourself?

Hi, Melanie! Thanks so much for inviting me! Let’s see, what should I say? I love chocolate. And rescue animals. And writing. I’m slightly addicted to stories, so if I’m not writing, I’m either reading, watching a movie, or watching one of my favorite TV shows—of which, there are many! I think I love to escape everyday life. When I was a child, I completely immersed myself in fairy tales, Grimm’s fairy tales to be exact. So much so that one of my best friends and I imagined she was Rose Red and I was Snow White. (And that particular friend is the one I modeled Molly in Lost Girls after.)

A true storyteller at heart, it would seem! That’s great! Speaking of stories, let’s get into the novel! What sparked the idea behind Lost Girls?

I actually started writing the story from a hook—just a one or two sentence premise. From there it took off. I don’t over-plot, so I really had no idea what all the plot twists would be, or who the bad guy was (he changed about three times while I was writing the book!)

The story took on a life of it’s own, eh? That’s really cool! Now, I knew going in that Lost Girls is dark (which I LOVED), but I wonder if writing a dark YA novel was difficult. Did you have to restrain your writing because it was YA instead of adult?

Actually, no. I don’t hold back. There are certain places I won’t go just because I don’t personally want to go there and certain verbiage (swearing) I don’t use because I don’t like it, so I have my own set of guidelines about what’s acceptable and what isn’t. Beyond that, if I feel it fits in the story and that it rings true for the characters, then I’m all in!

I definitely think the darkness fit, and I love the stark contrast between elegant ballet and brutal fighting in Lost Girls. Why did you combine these two for this story?

Thank you! That happened rather organically. I knew my MC, Rachel, was going to be involved in something athletic so I gave her ballet as her background. I felt it was feminine, yet extremely difficult. I also didn’t want to give away too much of the secret plot. So if she had started out as a kick boxer, it probably wouldn’t have been as much of a surprise in the end.

That makes total sense! And speaking of fighting, there are a lot of fight scenes in this book. Do you personally know how to fight like Rachel? Or are you a dancer instead?

Haha. I am neither. I’m the most uncoordinated, awkward person in the world! I did lots and lots of research for the fight scenes. Each one was choreographed and each fighter had their own style. I purposely put two people in the ring with different fighting styles to make it more difficult for them. Also, each character had to be in the same weight class, but based on their body structure and size, they each had a different fighting style. To put this together I watched a lot of fighting videos, interviews with female fighters, plus I studied boxing techniques and terminology. What I love is if a guy reader (since they tend to like action) tells me they loved the fight scenes. It makes me feel like all that work paid off! The funny thing is while writing I’d come to the part where I needed a fight and I’d write — [put fight scene here] — then I’d finish the rest of the scene or chapter. I’d do research and go back and write the fight scenes later.

I loved the fight scenes just as much as the next guy. Haha! You know what I also love? Tattoos! I don’t want to say too much, but being a tattoo addict myself I gotta ask, do you have any tattoos?

I don’t! I wish I had tattoos everywhere! But I can never decide. My style changes every other day. Sigh. I would love to have at least ONE full-sleeve tattoo. Someday. Maybe when I’m 70? LOL. That would be appropriate, right? A 70-year-old woman walks into a tattoo parlor and says, “Give me a full-sleeve tatt, please. This won’t hurt, will it?”

Haha! I think that’s an awesome idea! It’s never too late to get a tattoo, and you’d be the coolest 70-year-old in the parlor! Okay! Back to the book. What is your favorite part of the Lost Girls story?

That’s such a tough question because my answer changes all the time. I adore the relationship between Rachel and Molly, maybe because it was based on a true, long-time friendship of mine, so it feels real. But I also love the ‘thing’ that happens in the climax. I know Rachel is a tough girl, but even tough people need help. That’s a crucial message in this book. You aren’t going to get by in this life if you try to do it all on your own.

I think everyone needs a little help once in a while, which you definitely support in this story. In fact, I get this feeling that Lost Girls is supposed to be both exciting and a cautionary tale? Was that your intent when writing this story?

Absolutely! My ultimate goal is always to entertain. But beyond that, if I’m going to take the reader someplace dangerous and dark I have a responsibility to make sure they don’t want to go there. I don’t want to glorify the horrible things that are happening. I want the reader to be drawn to the story and the mystery and the character, but to be horrified by the terrible things that happen. I don’t a teen to think it’s fun to run away, that only good things happen, so maybe I should try that. Or that taking drugs is a great thing and pass some of that to me, please. I made plenty of mistakes as a teen, pursuing fun things, and ended up in Juvie more than once. That part was NOT fun! LOL. So, yes, there’s a cautionary edge to most of my stories, because I’d rather people live vicariously and be safe.

Ah, yes! Live vicariously through writers! Haha! Actually, as a writer, I’m curious about what made you decide to write this story in a non-linear fashion, having Rachel gain her memories back bit by bit?

I don’t think I intended to tell it that way. It just happened. There were so many secrets! Rachel didn’t know what had happened. The reader didn’t know what had happened. And neither did I! LOL. I love stories where the reader is discovering things at the same time as the MC. I love mysteries. So I guess I was revealing the answers, one layer or one item at a time. That said, I love a good story told in a non-linear fashion. I adored the movie Memento and the book The Time Traveler’s Wife. I think the trick is to keep the story arc intact, and to have one scene lead into the next—whether the story is linear or non-linear.

Thank you so much for joining us! But before we go, is there anything else you want to add?

Once again, thank you so much for inviting me! I sincerely appreciate it. Also, if anyone would like to keep up with my latest releases, events and giveaways, I highly recommend that they subscribe to my author newsletter. Also, I’m taking part in several promotions in March and in one of them—the SFF Mega Promo—I’m giving away my first YA novel, Fathom, as a free download. And, of course, please stop by my website to see all my books. So, hopefully your readers will check it out!