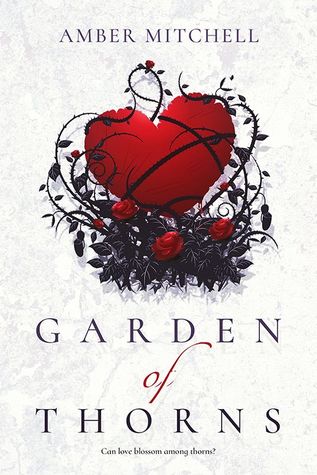 Garden of Thorns
by Amber Mitchell

Entangled Teen was very gracious in their decision to grant me access to a couple advanced reader copies of their books and Garden of Thorns was one of them! It was a unique, fantasy world that mixes the beautiful and the gritty. But you can read more about that and my other thoughts in my review. Today, though, we’re gonna chat with the wonderfully talented author of Garden of Thorns,

Hi there, Amber! Thank you for joining us today! Why don’t we start off with you telling us a little bit about yourself?

Hello! Thank you for hosting me today! I have a BA in Creative Writing from the University of South Florida which is where I fell in love with the young adult genre. My love of writing developed at an early age but I didn’t start to take it seriously until my junior year of high school. When I’m not writing, I like to read, do escape rooms (our group is like 22:1), discover new t.v. shows and I’ve recently gotten into Dungeons and Dragons since it combines storytelling and lots of action!

Wow! You’re involved in lots of different things. Did any of them inspire the story behind Garden of Thorns?

I’ve always loved reading epic fantasy. The first novel I wrote (which took me four years and clocked in at about 300,000 words) was an epic fantasy. I love creating worlds, cultures and getting lost in them for hours. For Garden of Thorns, I’d always had this idea that when girls wore ball gowns and spun, they looked like flowers, and I thought the idea of a girl forced to dance but wanting to be free would make for an awesome book. When I first started writing Garden, I was actually elbow deep in a revision on another book but I couldn’t get Rose’s voice out of my head and abandoned the one I was working on to write this one.

Being forced to dance sounds both beautiful and horrible, which is definitely reflected in the Garden. I was actually really intrigued by the stark contrast between pretty and gritty in the Garden. What made you combine these two elements?

As a kid in school learning about nature, I was really intrigued by the venus flytrap. I say intrigued but I was also partially horrified. The idea that something so dangerous could mimic something so beautiful fascinated me. You see it in nature all the time: brightly colored frogs that are poisonous, beautifully patterned snakes with fangs. That idea that something beautiful could also be so dangerous and gritty just seemed natural when I started writing, especially when it came to the Garden. The contrast has always stuck with me.

For those who don’t know, the Garden is the traveling show in the story, and I really love that Rose is an acrobat for the show. It added a unique aspect to this story. What made you pick her to be the acrobat?

I wanted Rose to have a skill she could fall back on. I knew I wanted to write a story that was going to involve a lot of action but also knew she couldn’t magically know how to fight with her background. Acrobatics gave her an option in battle. She might not be able to wield a sword well but she can squeeze her way out of tight situations with the skills she’s gained.

Wielding a sword is definitely a talent. Speaking of talent, if you were part of something a little less malevolent than the Garden, what act would you want to have in the show?

I don’t think I’d be very good at performing! The idea of aerial dancing sounds fun to me and I think it is beautiful to watch but there is no way I could do it (I trip over my own feet way more than I’m proud of). I guess if I was going to do anything, it’d probably be an act involving animals. Every time I go to Medieval Times, I get most excited watching the hawks so probably something like that!

Oo! The hawks are always so cool to watch! You know what else would be cool to watch if it were real? Zarenite. How did you come up with this mineral?

Magic is one of my favorite things about fantasy but I like the explanation of magic to be really good. While brainstorming, I thought of a lot of different things but I kept coming back to science based magic. I liked the idea that what looked mystical to some of the other people could actually be explained and since the rebellion was already living in a mine, it made sense that they would rely on a mineral. After I figured out that what they use should be mineral based, I started working on what properties I wanted it to have and how the rebellion could use it. It also answered the other problem I kept having which was how a rebellion with significantly less people could stand a chance during a war.

Zarenite was such an awesome piece of world building, but as a reader who loves world building, I was disappointed we didn’t get to see more of Varsha. Is there going to be a sequel or perhaps a novella that’ll satisfy my curiosity?

I would really like there to be a sequel! I’ve spent a lot of time planning Varsha out and would love to get there. There was a draft where I tried to include it in Garden but the scope felt too big for the story I was trying to tell. I definitely don’t feel finished with this universe and would love to tell a larger story!

Well, I hope you get the chance to continue this world. For now, though, I noticed a few of the character meetings seemed awfully coincidental in Garden of Thorns. 😉 Do you believe in coincidences or was it fate?

I was just having this conversation with someone else a few weeks ago. I’m not sure exactly. I guess I would say that I believe in fate but not in the traditional way. I don’t think things are already written down and everything is preplanned. I do think that some things are inevitable. Like if you are meant to meet someone, the universe will make it happen, even if you keep making choices that delay it.

The universe was definitely in play in this story, but that’s as far is it went. When it came to trusting one another, the characters were on their own. which made trust the big theme in Garden of Thorns. Do you give your trust easily or are you a little more hesitant like some of the characters in the story?

Definitely both. It takes me a while to warm up to people because I like to observe them first to see if we’d be a good fit and because I want to make a good impression. Once I’ve decided that we’re friends though, I give my trust easily.

Thank you so much for joining us today! Is there anything else you’d like to add before you go?

Thanks for such a thoughtful interview. I really had to think about some of these questions! I guess I’d like to add that this entire process has been a whirlwind. It has been the most exciting and nerve-wracking experience of my life. For those that are striving to get your story heard, keep at it. The road isn’t easy and it is full of rejection, but the only way to truly fail is to stop trying.