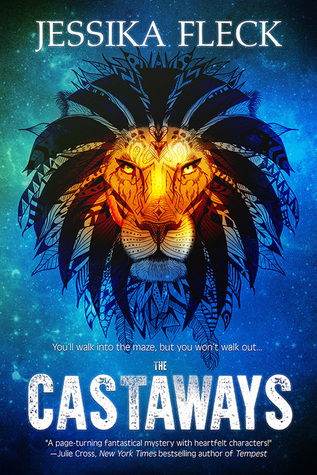 The Castaways
by Jessika Fleck

Entangled Teen was very gracious in their decision to grant me access to a couple advanced reader copies of their books and The Castaways was one of them! It’s a story with a dash of Lord of the Flies, a pinch of teen angst, and a whole lot of finding yourself. But you can read more about that and my other thoughts in my review. Today, though, we’re gonna chat with the author of The Castaways,

Hi there, Jessika! Thank you for joining us today! Why don’t we start off with you telling us a little bit about yourself?

Thanks so much, Melanie, I’m so happy to be here on your blog! A bit about myself… I’m a mom of two girls (they’re 10 and 12) and we currently homeschool = I do pretty much all of my writing in the evenings at a coffee shop. I’m married to my high school/college sweetheart and we live in central Illinois where he’s a sociology professor at a university. We’ve moved around a lot (from Hawaii to Vermont!) and consider Colorado home, despite we both grew up in Texas.

I have a BA in social studies (which I’ll probably never officially use). I started writing when my daughters were very little and I needed a creative outlet. I didn’t originally plan to be published and once I did decide to pursue it, it didn’t come easily. I brokered both of my publishing deals sans agent, but just signed with Victoria Marini of IGLA and have several other projects in the works. I love cats and coffee and traveling and chocolate and boots… not necessarily in that order.

Now! What inspired The Castaways?

The idea for The Castaways came to me in two parts. First off, a friend of mine was going through a really rough time with her daughter being bullied at school. It was heartbreaking and horrifying and left me at a loss that such things happened so regularly and in plain sight of teachers and administrators and other students. It’s not right.

As all of that was sort of percolating in my mind, Halloween came along and my husband and I took our daughters on the obligatory pumpkin patch excursion. Of course, we visited the corn maze. And, of course, it was as creepy and beautiful and mysterious as it always is. At one point we decided to split up—one adult with one kid— and race to the finish. Well, I had our youngest daughter who wasn’t at all interested in getting out of there and so we just ambled through the crooks and bends and dead-ends. And that’s when it hit me: what a perfect place to run away when you’re trying to hide. And that was pretty much the beginning of The Castaways. The rest very naturally spiraled into place.

Our main character, Olive, isn’t exactly a strong protagonist, which offers a change from many YA stories. Was this intentional or just the way Olive turned out?

I suppose it depends what you mean by a strong protagonist. If strong = a fierce battle axe wielding hero, then no, Olive definitely isn’t that. She’s much more relatable because of her hesitations and insecurities, because of the hardships she’s struggling to work through. She has trust issues and deep wounds and is thrown into a situation she’s pretty ill-equipped to deal with. But. She does deal with it. And that’s the beauty of Olive. She is so much stronger and braver than she ever realized which makes for a lovely character arc.

Bullies had a lot to do with why Olive wasn’t very strong. Yet, I was quite surprised no one seemed to notice what was going on nor stood up for her. Do you think this was because she hid it so well or because people don’t see what they don’t want to?

First off, I don’t believe being bullied made Olive weak. It definitely challenged her and was hurtful and draining and a horrible, traumatic ordeal for her to go through. However, those skills she developed to help cope with the bullying definitely lent to her strength while on the island. She was able to take something terrible, something she wished had never happened, and flip it around to use it for good—to literally save the lives of her island family.

As for no one seeming to notice what was going on or stand up for her… Tawny did. If you can recall, she pleaded Olive confide in her parents. But, as in real life, things aren’t always so black and white. People make mistakes. Also, it was important to me to highlight the fact that this type of bullying brutality does happen in schools daily and it is seen and heard and, sadly, brushed under the rug and trivialized which isn’t right.

Bullying was a common factor for not just Olive, but many of the characters in The Castaways. Could this be because you were bullied when you were younger?

I was bullied in elementary school. Not near to the extent that Olive was, but in a more emotional, verbal, whispery sort of way. And, I can fully admit, that it still, decades later, hits me in the self-doubt pocket from time to time. However, Olive’s story was inspired more by the friend I mentioned earlier and her daughter’s horrible ordeal.

The book didn’t really get into how to approach bullies. So, what do you believe is the best course of action for those being bullied?

The Castaways focuses more on finding your inner strength and learning to trust again, owning your authentic self. As for how to deal with bullies, there are some amazing organizations that have made it their missions to build and spread awareness around bullying. Kind Campaign is one that I love that deals mostly with girl on girl bullying/hate—I’ll be handing out their Kind Cards at my signing next month. Another is Stomp Out Bullying. Both are mentioned in the acknowledgement for The Castaways.

Why do you believe none of the new islanders challenged the good vs evil war that had established on the island?

Perhaps they did. But when one side is much more aggressive than the other, there isn’t much time for diplomacy or peace talks. Most of their time was spent on pretty intensive offense or defense and basic day-to-day survival. Neither group was going to relent until they were forced to face things head on.

I was really hoping to learn more about the other characters in the story, particularly Tilly because she seemed so resourceful. Who was your favorite character in the story besides Olive obviously?

Definitely Bug. She’s such a sweet little, sassy gem of a character! I’d love to write her a book all her own.

All things considered, the island doesn’t seem like that bad of a place. Would you want to stay if you were sent to the island?

It definitely wasn’t ‘home’. True, they had various food sources and found shelter, but they had to get resourceful to figure those things out. Remember, Olive arrives after several of them have been there for years – she definitely reaped the benefits of their work and much trial and error. 😉 Would I want to stay there? If the castaways figured out a way to get indoor plumbing worked out… Maybe. But only if I could bring my family and cats along.

Thank you so much for joining us! But before we go, is there anything else you’d like to add?

It’s been such a pleasure, Melanie, thanks so much for having me! Just a huge thank you to everyone who has read, rated, reviewed, blogged, IG’d, Tweeted, and Facebook’d about The Castaways. The overwhelming support for my debut has been heartwarming. You all are the caffeine to my coffee, the bee’s knees! ❤

Jessika Fleck is an author, unapologetic coffee drinker, and knitter — she sincerely hopes to one day discover a way to do all three at once. Until then, she continues collecting vintage typewriters and hourglasses, dreaming of an Ireland getaway, and convincing her husband they NEED more kittens. Her YA debut, THE CASTAWAYS (Entangled TEEN) is now available. Her next YA novel, THE OFFERING (Swoon Reads/Macmillan) is due out in the fall, 2018. Jessika is represented by Victoria Marini of the Irene Goodman Literary Agency.