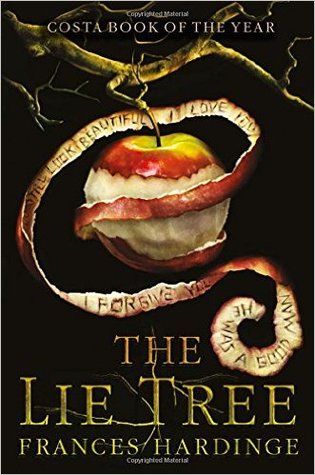 THE LIE TREE
by Frances Hardinge

It was not enough. All knowledge- any knowledge – called to Faith, and there was a delicious, poisonous pleasure in stealing it unseen.

Faith has a thirst for science and secrets that the rigid confines of her class cannot supress. And so it is that she discovers her disgraced father’s journals, filled with the scribbled notes and theories of a man driven close to madness. Tales of a strange tree which, when told a lie, will uncover a truth: the greater the lie, the greater the truth revealed to the liar. Faith’s search for the tree leads her into great danger – for where lies seduce, truths shatter . . .

Let’s Build it Up!
As much as everyone loves backstory and knowing how the characters got to where they are, there is just too much of it in this book. The first half was spent introducing characters and getting you comfortable with them. Only in the second half of the book do you finally learn what the plot is. Had the plot been introduced sooner, the character intros could have been woven into the plot instead of separating them in one half the book each.

Nonsensical
To be honest, even when the plot did start going and become clear, much of what was going on was rather confusing. Perhaps it’s just my unfamiliarity with reading mystery novels, however, I found myself lost on more than one occasion.

The train of thought for the main character seemed a bit… scattered and illogical at times. Thus, making it near impossible to follow. And some of the conversations between characters were designed to release information, but left me wondering what on earth they were talking about. The lack of clarity made it quite difficult to follow the last half of the book and to feel any conclusion had been reached.

A Darkness Within
There is definitely a dark aspect to this story what with the tree needing to be told lies. Thus, the person telling the lies must agree that telling lies is okay and spreading them widely is acceptable. Not only that, but there is quite a bit of secret intrigue going on in this story (I just felt like I missed quite a bit of it because it was so subtle.) The entire story has a very dark, mysterious vibe to it, but… I’m not sure it ever quite reached its full potential before the story ended. Thus, I was left feeling unsatisfied with the ending.

1 thought on “{REVIEW} The Lie Tree by Frances Hardinge”