VASSA IN THE NIGHT
by Sarah Porter 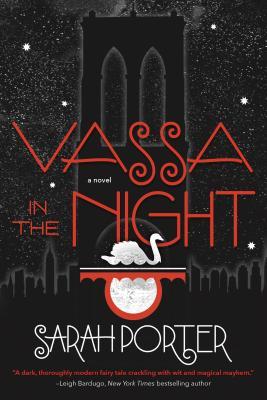 In the enchanted kingdom of Brooklyn, the fashionable people put on cute shoes, go to parties in warehouses, drink on rooftops at sunset, and tell themselves they’ve arrived. A whole lot of Brooklyn is like that now–but not Vassa’s working-class neighborhood.

In Vassa’s neighborhood, where she lives with her stepmother and bickering stepsisters, one might stumble onto magic, but stumbling away again could become an issue. Babs Yagg, the owner of the local convenience store, has a policy of beheading shoplifters–and sometimes innocent shoppers as well. So when Vassa’s stepsister sends her out for light bulbs in the middle of night, she knows it could easily become a suicide mission.

But Vassa has a bit of luck hidden in her pocket, a gift from her dead mother. Erg is a tough-talking wooden doll with sticky fingers, a bottomless stomach, and a ferocious cunning. With Erg’s help, Vassa just might be able to break the witch’s curse and free her Brooklyn neighborhood. But Babs won’t be playing fair….

Um… what?
This was honestly one of the most confusing books I have ever read. The scenes were garbled with flowery writing to make them more fantastic and riveting than usual, but it just caused me to get so lost as to what was going on. (This also had a lot to do with the confusion of the main character and her lack of understanding of what was going on. Not my preferred method of story-telling.)

And honestly, just the writing itself was confusing. The author had a different way of writing sentences than I’m used to. As a result, I would get lost in what was being said and then in the paragraph and then the scene to the point where I started skipping large sections of text in the last few chapters. It was easier to streamline through the dialogue and certain passages than read the whole thing. 😕

Oh look! Passive MC
Yup. Yet another story where the MC is the most passive, uninteresting, inactive person on the planet. Everything happens to the character rather than the character taking any initiative to do something herself. Yet everything magically (no pun intended) figures itself out in the end because, you know, she’s the main character and everything. 😒

Random Chapters
God! Don’t I just love random chapters of insight into the past? 😀 Oh wait. I don’t. 😑 Because they are soooo annoying! I’m not sure where this idea of ‘interlude’ chapters came from (maybe theater productions or something), but it’s a waste of space in my opinion. Yes, it explains the past and what not. But who cares?! An effective storyteller should be able to implement those items in the present without having to devote an entire chapter to time-jumping. Come on!

4 thoughts on “{REVIEW} Vassa in the Night by Sarah Porter”