DARK BREAKS THE DAWN
by Sara B Larson 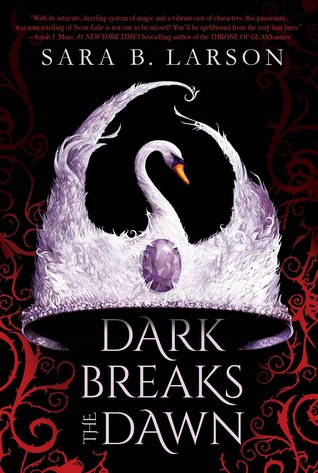 After a thousand years of peace, the battle between Light and Dark has resumed.

On her eighteenth birthday, Princess Evelayn of Éadrolan, the Light Kingdom, can finally access the full range of her magical powers. The light looks brighter, the air is sharper, and the energy she can draw when fighting feels almost limitless.

But while her mother, the queen, remains busy at the war front, in the Dark Kingdom of Dorjhalon, the corrupt king is plotting. King Bain wants control of both kingdoms, and his plan will fling Evelayn into the throne much sooner than she expected.

In order to defeat Bain and his sons, Evelayn will quickly have to come into her ability to shape-shift, and rely on the alluring, but mysterious Lord Tanvir. Not everyone is what they seem, and the balance between the Light and Dark comes at a steep price.

World-Building!
The world of Lachalonia is beautiful and well designed. There are some obvious stereotypes what with the battle between Light and Dark, but it was more than just that. There was more development than just the good vs evil and the actual cultures and characters were well accented to give them life beyond their obvious clashes. That being said, I would have liked some of the characters to have more roundness because this story did play very much off the Good vs Evil trope and it would have been nice to see the ‘dark side’ as something more than just ‘evil.’

Realism
One problem I generally have with fantasy novels is the lack of realism in the magic and its development, but I was pleasantly surprised with this one. The magic is well explained and given multiple justifications. There was one particular scene that I wasn’t really sure I bought, but the rest of it was well developed.

Pacing
The pacing was actually quite good in this book. It runs at a consistent pace with multiple deviations from what one originally thinks is going to happen. This ensures that there is limited predictability and accounts for realistic problems that would occur. It allowed the story and problems to progress at an appropriate pace for the story. That being said, I had issues with the last few chapters because there was a definite lull. I understand the purpose, but I wish that particular section of the story could have been approached differently.

Multi POVs
I’ve said it once. I’ll say it again. (And I’ll probably say it a hundred times more.) I really do not understand why certain stories use multiple POVs and this is one of them that truly did NOT need them. A few of the POVs were fine, but a handful of them were just unnecessary. They added nothing to the story and while they were designed to create intrigue, they never actually offered anything in the way of information or insight or anything. Thus, they were space fillers. Not a good choice, in my opinion.

Oo! That Ending!
YASSSS! I am soooo happy about this ending. That’s all. 😉