INTO THE DROWNING DEEP
by Mira Grant

I received this free physical ARC from the publisher, Orbit, in exchange for my honest review.

Seven years ago, the Atargatis set off on a voyage to the Mariana Trench to film a “mockumentary” bringing to life ancient sea creatures of legend. It was lost at sea with all hands. Some have called it a hoax; others have called it a maritime tragedy.

Now, a new crew has been assembled. But this time they’re not out to entertain. Some seek to validate their life’s work. Some seek the greatest hunt of all. Some seek the truth. But for the ambitious young scientist Victoria Stewart this is a voyage to uncover the fate of the sister she lost.

Whatever the truth may be, it will only be found below the waves.

But the secrets of the deep come with a price.

Long Build
This isn’t a book you’re going to finish in one sitting (unless you’re that super insane, mega-fast reader.) But I don’t say that just because of the sheer length of the book, I also say it because of the way the story builds and the way it flows. It’s not a fast-paced read. It has a lot of back-story to build up and it really gives you insight into who characters are, which takes extra time and space. Additionally, the very way the story is written is a bit more languid, offering extra detail in just about every place possible. Some times interesting, other times a tad overdone.

Characters
Something I found quite interesting about this particular book is that it doesn’t follow just one character. In fact, it follows quite a variety of characters and some are only in there as needed, meaning that each character is given an unequal amount of ‘screen time.’ I say ‘screen time’ because the story actually progresses much like a movie would, introducing and developing character and scenes quite in the same manner. It was an interesting observation, but if anything it enhanced my reading experience. I built my own idea of what was happening and the style of writing helped to do that.

Horror
So… some people are classifying this book as horror and I mean, I suppose, but I personally didn’t find it very scary or very jump-worthy or tension-filled. Yes, there was debate about how it would end (which I wasn’t really a huge fan of the way it ended, mind you), but I don’t personally qualify this story as horror. That being said, should you have a weak stomach, you have been warned.

Concept
Oo! I love this! Everyone knows what a mermaid is and you so you have an idea going in, but then they throw all this science at me!!! I was dying! In a good way. 😉 I loved all of the tech stuff and the science talk. If this expedition were a real thing, you know dang well I’d wanna be on it to do some fancy research and chat with other scientists. (Of course, this book also reminded me why scientists are sometimes a plague upon the world. -.- The matter of ethics was brought up lightly in this story, but I personally would have loved to really delve into the ethics. [Then again. I love debating and scientific ethics is one of my favorite topics. :p ]) 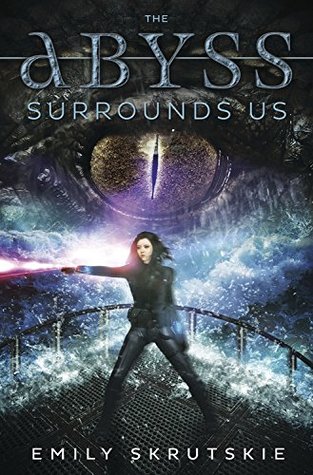