GIRL VS.
By X. Culletto 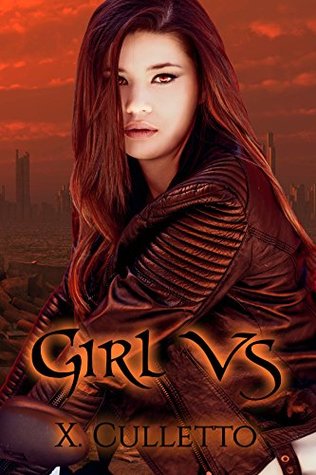 Before the Vela invasion, Rhyan’s biggest concern was getting through a day of school. But when she is thrust into the madness of a kill-or-be-killed world, her true strength emerges and a deadly warrior is unleashed. Stumbling through the new morals of a post-apocalyptic world, she learns to depend only on herself. As she gets closer to discovering what the aliens actually want, her lethality becomes unmatched, and she soon learns the extent she’ll go to in order to survive.

The world of Girl Vs

It’s no secret that the world of Girl Vs  was inspired by the post-apocalyptic setting in The Walking Dead. A big fan of the show, I tried to capture the austere tone so well depicted by those episodes. The big difference, of course, was that I was dealing with aliens rather than zombies, which meant I needed a rational and intelligent reason for them to be there, destroying humanity in hand-to-hand combat. I also needed to describe them as being smart, intimidating, and, well, alien. I hope I’ve succeeded in doing all of these. Xela Culletto loves all genres, but especially loves to geek out to sci-fi and fantasy. She currently lives in Utah with her husband and three children.