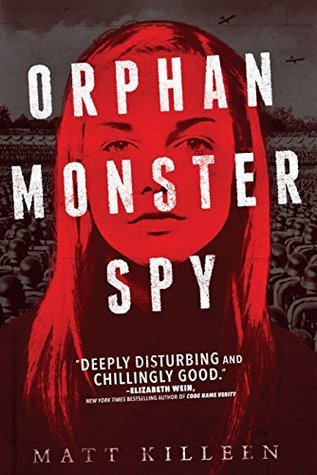 Her name is Sarah. She’s blonde, blue-eyed, and Jewish in 1939 Germany. And her act of resistance is about to change the world.

After her mother is shot at a checkpoint, fifteen-year-old Sarah meets a mysterious man with an ambiguous accent, a suspiciously bare apartment, and a lockbox full of weapons. He’s part of the secret resistance against the Third Reich, and he needs Sarah to hide in plain sight at a school for the daughters of top Nazi brass, posing as one of them. If she can befriend the daughter of a key scientist and get invited to her house, she might be able to steal the blueprints to a bomb that could destroy the cities of Western Europe. Nothing could prepare Sarah for her cutthroat schoolmates, and soon she finds herself in a battle for survival unlike any she’d ever imagined. But anyone who underestimates this innocent-seeming girl does so at their peril. She may look sweet, but she’s the Nazis’ worst nightmare.

Now? How ’bout now?
This book took forever to go ANYWHERE. There was so much build up and backstory thrown in that they actual story didn’t feel like it picked up until about half way through the book. After that, the pace rushed. It was like there were weeks and weeks and then just a handful of days for the main climax. It was really quite frustrating as I don’t believe the extensive first half of the story was necessary to understand the rest of it.

Interesting Concept
That being said, when the story actually did finally reach the main plot and the pacing picked up a bit, it was interesting to read about. I really liked the direction the story took and the way it all played out. It might have been a bit unrealistic and way darker than I had thought it was going to be, but it was fun to read about.

Flashbacks/Dreams
Ugh… I don’t know why these were in here. Yeah, maybe they were trying to offer some backstory into the main character’s personality (which wasn’t really there, in my opinion), but these just felt so unnecessary. I think their purpose was to make you feel more for Sarah than you may have already, to sympathize with her, but I kind of just got bored with them. They didn’t feel necessary for the story.

German Words
Okay. Another thing I have to complain about was the use of German words within the story. Obviously, that would be expected since the characters are German, in Germany, but the German words were immediately followed by their English translations completely defeating the purpose of the German to begin with! Not only that, but some of the words weren’t translated. You know which those were? Swear words and inappropriate words, most often derogatory towards young females. I found this style to be very annoying and degrading and it became extremely annoying very quickly. Also, many of the German words were simply unnecessary. It got to a point that it felt like the author was simply flaunting their knowledge of the German language rather than needing it for the story.

Talking in Riddles
I don’t know if it was just my lack of knowledge of history, but it felt like the main characters, Sarah and Her Haller, were constantly talking in riddles. I couldn’t make any sense of what they were saying and they never really finished their sentences. It was like the two understood each other so well that even the reader could not discern what they were talking about. It made it very difficult to understand what was going on and to be interested in the story.