DAUGHTERS OF RUIN
by K.D. Castner 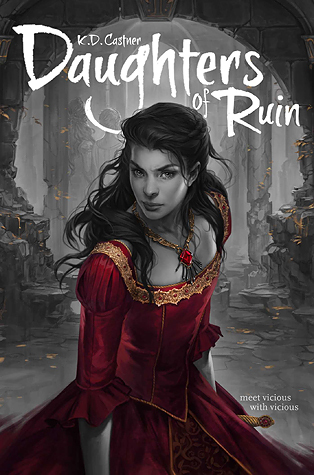 Not long ago, a brutal war ravaged their kingdoms, and Rhea’s father was the victor. As a gesture of peace, King Declan brought the daughters of his rivals to live under his protection—and his ever-watchful eye. For ten years the girls have trained together as diplomats and warriors, raised to accept their thrones and unite their kingdoms in peace.

But there is rarely peace among sisters. Sheltered Rhea was raised to rule everyone—including her “sisters”—but she’s cracking under pressure. The charismatic Cadis is desperately trying to redeem her people from their actions during the war. Suki guards deep family secrets that isolate her, and quiet Iren’s meekness is not what it seems.

All plans for peace are shattered when the palace is attacked. As their intended futures lie in ashes, Rhea, Cadis, Suki, and Iren must decide where their loyalties lie: to their nations, or to each other.

Main Characters
There are four main characters in this story: Suki, Rhea, Cadis, and Iren, and each are from different countries with different heritages and cultures. As such, they are vastly different from each other. And I hated 2/4 of them. Suki (the youngest) is a whiny, pompous, naive little child who mentally seems ages younger than her fifteen years. And the style she was written in was beyond annoying! The other princess I hated was Rhea because she is just plain pathetic. She is literally blind to everything going on around her, incapable of communicating anything to anyone, and is literally an idiot. Unfortunately, as the 4 POVs shifted equally throughout the book, I pretty much hated half the book.

That Prologue
Wow. I have never seen such a long prologue. I’m not even joking when I say the prologue was 8% of the entire book and it was literally completely unnecessary. Why? Because the first actual few chapters of the book… do the same exact thing that the prologue does! They were just a waste of space and made the beginning of the book drag on with pointless, repetitive information that could have been better displayed elsewhere in the story (and which would have offered an interesting story.)

The Plot
If you stick through the first 50% of the book – because that’s all pretty much useless information – you’ll finally find… a plot! *gasp* That’s right. There is, in fact, a plot hiding in this story and it is mildly interesting. Cliche and overdone, yes. And it is not advanced at all by Suki or Rhea’s POVs, but it did a nice job of unraveling and Cadis and Iren’s POVs offered a second element to the intrigue of the story.

2 thoughts on “{REVIEW} Daughters of Ruin by K.D. Castner”