NOTES OF MAGIC
(The Bohemians #1)
by Jessica Bucher 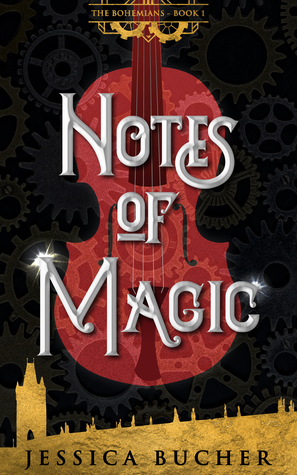 Taq, a young fiddler, comes to Prague with dreams of joining the Bohemians—a band of immortal, magic-wielding street performers. With a mission to right past wrongs, things don’t go as planned when he meets the beautiful performer, Katia. Now, he must decide if revealing his secret is worth losing her heart.

Katia has spent one hundred years chained to the city, broken-hearted and silent, waiting for her chance to be free. But with an impending threat on Bohemia itself and a mysterious newcomer, peace is starting look farther than ever. Now she must decide if she should trust Taq or put her faith in the one who broke her heart—the tyrannical Magistrate of Bohemia.

Curses can be broken, but at what cost?

Magic, romance, and music are beautiful elements often weaved together in stories and they create gorgeous stories. Why do you believe these three vastly-different elements blend so well together? Is there an invisible thread that connects them?

Absolutely. I have always been a huge fan of music and the feeling that it creates. People who create music ARE true magicians, in my eyes, and I have always thought that if anyone could really harness magic, it would be the artistic. The lines are really blended between music, magic, and romance.

There is a character in the novel who has the power to manipulate and compel others to do what he wants. Although some use this power for evil, he is a good-natured person and hardly uses his own power because of the moral questionability of doing so. What he does do, however, is directs his ability into his fiddle-playing. If he wants his listeners to love more and be kinder, he puts that into his music. It’s a really powerful message, and I think it’s not so far from the truth. Music really does have the power to compel. Jessica Bucher is a Young Adult author living in Texas with her husband and children. Her first book, The Hereafter, was published in 2016. When she’s not writing, editing, or chasing her kids, she can be found scrolling through Facebook or planning her next travel adventure.