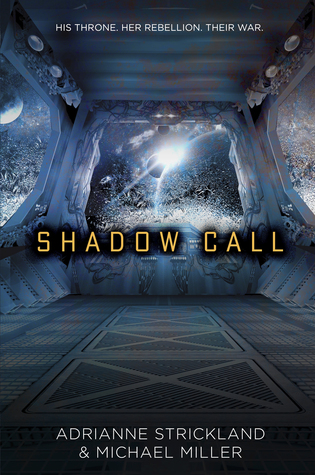 His throne. Her rebellion. Their war.

Qole is the youngest starship captain in living memory on her homeworld of Alaxak and has spent her life hunting a dangerous energy source called Shadow. Alaxans distrust and evade the galaxy’s royalty as a rule, but Qole is now harboring the exiled Prince Nevarian Dracorte, along with some very conflicting feelings about it—and him.

Nev’s feelings are just as complicated, but not towards her. When it comes to Qole, he knows one thing: he’d do anything to stay with her. But when Alaxak is attacked and Nev finds himself framed for murder, he realizes the only way to help Qole and her people is to fight for the throne that should be his. To become the royal she might hate.

As for Qole, she would never have imagined herself as the leader of a rebellion. Despite that, she soon realizes that hiding from her power is no longer an option. It’s time to answer the call, even if it kills her.

But not even Telu could hack its programming fast enough and send it on another course of action. The drone, three times the size of the Kaitan, launched straight for us.

Everyone cursed then. Tentacles waving, plasma-rimmed maw gaping, the drone lashed out at our ship. Without think­ing, I threw the Kaitan into a maneuver that kept us from being rent in half, and heard Arjan shout over the comms.

Right. He was attached to us, and I’d sent him whipping. We usually only encountered dangerous drones with advanced warning and full maneuverability—as in, without the skiff de­ployed. I couldn’t move without taking Arjan into account during Shadow runs either, but unlike asteroids, this drone wouldn’t stick to a simple trajectory that we could both pre­dict.

Nev wasn’t enough. Even together, we would never be good enough. Blackness flickered at the edges of my vi­sion. It wasn’t the darkness of space outside, but the darkness within me.

Everything was suddenly sharper, clearer, moving more slowly. I dodged the next five asteroids and the drone, and kept in line with Arjan with ease, dancing and skimming around everything like light over the ocean’s surface, all without tan­gling our net. If Arjan had threaded a dozen needles with the skiff, I was weaving an entire tapestry with the Kaitan. Eton didn’t even have to fire.

In the seconds that could have just as easily spelled our deaths, Telu had time to hack and reprogram the drone, and it went shooting off into the blackness. For a moment, all of us, even Arjan, just breathed.

“Okay,” he said, and I could feel him turning back to his feeds. “But after.”

At least now we all knew there would be an after.

By the time Arjan strode onto the bridge with a triumphant grin on his face, our new containment hold was filled to burst­ing with Shadow. Not that it improved my mood. All of us were waiting for him on the bridge, in fact, in a line like a firing squad.

He was much healthier than he had been even a couple of weeks ago, standing tall and looking more filled out, only fad­ing pink scars lacing his tawny skin where there had once been angry red wounds. But his eye . . . that would never heal with­out help. His black hair, once shoulder length, was chopped short and spiky to keep it out of the eye patch.

His grin fell when he saw the looks on all our faces. “Oh, come on.”

He especially avoided Basra’s gaze, but with a stubborn set to his mouth. He’d known Basra would be furious but had acted anyway. Maybe even because it would infuriate Basra. Arjan wasn’t only resentful because Basra was rich, but because Arjan hadn’t known he was, not while they shared the same ship as crew, or even after they started sharing the same bunk.

Basra glanced at me, as if saying, After you.

I tried to keep my voice level without much success. “You disobeyed a direct order and put the rest of us in jeopardy—”

Arjan’s eye narrowed a fraction. “I couldn’t hear you clearly.”

“Like hell you couldn’t!” I snarled at him, unable to resist stamping my foot while I was at it. “We just had those systems replaced. Don’t you dare lie to me.”

“Never mind that you’re lying to yourself.”

Before I could ask him what that was supposed to mean, Telu said, “The comm channels were as clear as deep space, Arjan. I would know, since that’s part of my job to monitor them.”

He shot her a look reminiscent of the obscenity he’d spat at her earlier, then said, “What’s the big deal anyway? I pulled off the run, and outmaneuvered a drone.”

I broke our formation to march right up to him, jabbing a finger in his chest. “No, you didn’t. Shadow did.”

He shrugged. “Yeah, so what? It’s our blasted curse, so why not use it to our advantage while we can, at least?”

Curse was one thing he had right. My father and mother had gone mad and died in their early forties. My oldest brother, Onai, had followed them at twenty-five. Arjan was twenty-one and I was seventeen. At the rate we’d been going . . . who knew?

“Why not? Are you serious, Arjan?”

“Maybe you can pretend you don’t need it anymore, but tell me how else I could have done that, how else I could keep doing what I’ve always done.” With only one eye, he didn’t add, but we all heard it. His anger took on a desperate note, and he tossed his head at Nev. “Just because you’re using him as a crutch, he’s not going to be mine.”

My breath hissed in between my teeth. “Oh, so instead you want to use the thing that will kill you?”

“I’d rather be dead than a Dracorte pawn for another sec­ond. What is he doing here, anyway?” He gestured violently at Nev this time. “He’s a royal! These are his family’s drones, in case you’ve forgotten. He doesn’t belong on this ship with us. He grew up in a blasted palace with everything he could have ever wanted, with servants feeding him off gold platters and armies shielding him from any real danger.”

Nev would never defend himself, but Telu snorted. “He doesn’t have any of that anymore. Remember, he helped the rest of us rip his palace half apart to get you out of there.”

“I was there because of him,” Arjan spat back. And, unfortu­nately, my brother had been too out of it to see what Nev had done, what he had sacrificed, to help rescue him. Being told something and experiencing it were two very different things.

“No, he gave it all up because his father, the king, exiled him on pain of death,” Eton said, casting his disapproving scowl in Nev’s direction, this time . . . but not before glancing at me.

Not that again. I was so sick of Eton’s attempts to tear down Nev in front of me to make himself look . . . what? Stronger? More loyal? The better protector of the crew?

Telu turned on Eton with her own ferocious glare. “Nev chose us before that, and you know it! That’s why he was exiled—”

“He’s just playing at being a Shadow fisherman!” Arjan said, his voice rising over everyone’s. “This is a game to him, not life. This is my life. And I’m in control of it.”

“You’re out of control,” I said quietly into the silence that followed.

“Speak for yourself,” he snapped. “How are your eyes?”

Arjan got right in my face, towering over me and staring me down with his one eye. “How black did they turn? And don’t you dare lie to me,” he mocked.

I flinched away. He had never spoken like this to me be­fore. It was usually me cowing him. Basra watched him warily, while Telu and Eton seemed just as surprised as I was, freezing in place.

“You forced me to do it,” I said, my voice coming out faster, higher-pitched. For a second, I sounded like his little sister instead of his captain.

Arjan’s own brown eye flashed black, as dark as his eye patch, and he spoke to Nev without even turning his head. “Do not touch me.”

After a glance at me, Nev took a step back.

“We’re both dead, Qole, one way or another,” my brother murmured, his voice softer now. “It’s just how we die that matters.”

He turned and walked off the bridge before I could an­swer. Not that I had an answer for him.

“I’ll try to talk to him, though I wouldn’t rate my chances at success very high,” Basra said, stalking after him. “Good thing I have a gambling problem.”

I stared after them both in silence. We were all gambling with something or another: Shadow, these ships, our lives, the people we loved. In this situation, I myself had gambled on Arjan and lost. Control of my crew had slipped away, at least briefly. We’d already been through so much that something like this could fracture us. I could spot the signs of it happen­ing, but I was too stunned by Arjan to stop it in its tracks.

I glanced at Nev, then away again. He wanted to talk, but my hands were shaking. All I could think about was how Arjan had looked at me, what he’d said.

Eton and Telu started to slip away without speaking to each other, and I deliberately turned away from Eton so he couldn’t catch my gaze. The lines were drawn: Telu on Nev’s side, Eton with Arjan, and me trying to stay as neutral as Basra, somehow in the middle.

“Nev.” I hadn’t spoken. It was Telu from her station, her voice raised to a pitch of worry, a comm at her ear.

“Whose?” Nev demanded, his voice rising with my sud­den surge of adrenaline. The lines of the Kaitan grew hard and sharp around me.

“Your family’s—the Dracortes. It’s a delegation from Luvos. The king and queen—your sister too—they’re asking for you.” Nev’s eyes flew wide as he looked at me. “They want you to meet them. Immediately.” ADRIANNE STRICKLAND and MICHAEL MILLER met in their hometown of Palmer, Alaska, where they agreed on 99% of book taste and thus decided to write together. Adri spends her summers as a commercial fisherwoman in Bristol Bay, Alaska, and the rest of the year writing. Michael grew up off the grid in a homestead in Alaska and now works in IT and tech. This is their second book together.

Giveaway Details:  3 winners will receive a finished copy of SHADOW CALL, US Only.

Ends on May 4th at Midnight EST!