Cas Lowood has inherited an unusual vocation: He kills the dead.

So did his father before him, until he was gruesomely murdered by a ghost he sought to kill. Now, armed with his father’s mysterious and deadly athame, Cas travels the country with his kitchen-witch mother and their spirit-sniffing cat. They follow legends and local lore, destroy the murderous dead, and keep pesky things like the future and friends at bay.

Searching for a ghost the locals call Anna Dressed in Blood, Cas expects the usual: track, hunt, kill. What he finds instead is a girl entangled in curses and rage, a ghost like he’s never faced before. She still wears the dress she wore on the day of her brutal murder in 1958: once white, now stained red and dripping with blood. Since her death, Anna has killed any and every person who has dared to step into the deserted Victorian she used to call home.

Yet she spares Cas’s life.

Horror we go again
You may have noticed I’m trying my hand at reading YA horror because I think it could be interesting and it offers me something different. (And because I like a little darkness in my books and writing. 😉 ) However! This is not horror. Yeah it’s got ghosts. Yeah it’s got some gore, but there is no suspense. There is no worry that the MC might not make it or whatever. I’d label this as paranormal before horror and only because there’s a ghost.

Character Development
So… I get the character development. It was the appropriate direction for the story, but… it didn’t feel natural. There wasn’t enough of Cas’s original personality in the beginning to understand and accept the change throughout the course of the story and even then, he seemed to change rather quickly instead of slowly over time based on the events in the story. And then he seemed to regress at the end! It was just all wrong.

It Ended… right?
One thing that really bothered me about this book was the sudden plot change. The first 60% of the book is focused on hunting ghosts and Anna and then suddenly, when you think the book is over, just kidding! It’s not! It just keeps going with a brand new plot and a horrible shift in everyone’s character like it’s just that easy. It could have been done, but not in the manner in which it was executed in the book.

Narrator
August Ross was the narrator for this book and I personally would never listen to him narrate again. I’m not generally a huge fan of male narrators, but I dislike him in particular. He inclined his voice for all the female characters. However, in doing so, he made them all sound like haughty, dumb, airheads and this really bothered me. 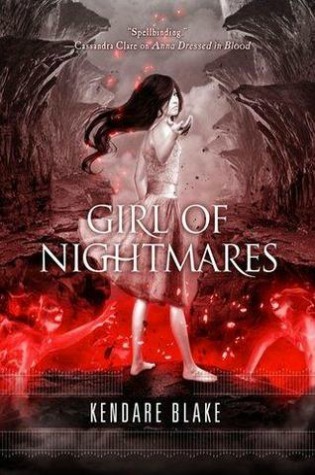 4 thoughts on “{REVIEW} Anna Dressed in Blood by Kendare Blake”