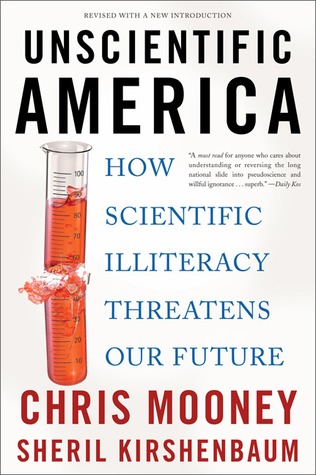 Climate change, the energy crisis, nuclear proliferation—many of the most urgent problems of the twenty-first century require scientific solutions, yet America is paying less and less attention to scientists. For every five hours of cable news, less than one minute is devoted to science, and the number of newspapers with science sections has shrunk from ninety-five to thirty-three in the last twenty years. In Unscientific America, journalist and best-selling author Chris Mooney and scientist Sheril Kirshenbaum explain this dangerous state of affairs, proposing a broad array of initiatives that could reverse the current trend.

Informative
Even as someone who has been in science since forever, I found this book to be very informative. It explains a bit of the history of science in the United States over the last century and how it has fallen in and out of the public eye. It also goes on to explain the reasons why it has fallen out of favor. More importantly, it’s not biased. It doesn’t picked sides, but explains that everyone has played a role in this.

Next To Do
What I would have liked a little more of was plans of action. I think science is important for everyone whether you’re religious or not, whatever your race or sexuality or however you identify. Science is designed to help us understand our world and I think we need to take measures to ensure it’s supported in the U.S. However, this book doesn’t really get into that. It’s more of a critique than a call-to-action.

Redundant
It’s a bit repetitive and kind of makes the same point over and over again. I felt like it could have been streamlined without so many examples to really get the point across. It was a bit difficult focus when it felt like the point was being beaten into the reader’s brain. A little less information could have helped really benefited this book to keep interest and make a point.