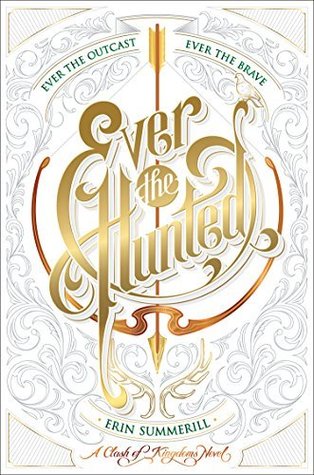 EVER THE HUNTED
by Erin Summerill

Seventeen year-old Britta Flannery is at ease only in the woods with her dagger and bow. She spends her days tracking criminals alongside her father, the legendary bounty hunter for the King of Malam—that is, until her father is murdered. Now outcast and alone and having no rights to her father’s land or inheritance, she seeks refuge where she feels most safe: the Ever Woods. When Britta is caught poaching by the royal guard, instead of facing the noose she is offered a deal: her freedom in exchange for her father’s killer.

However, it’s not so simple.

The alleged killer is none other than Cohen McKay, her father’s former apprentice. The only friend she’s ever known. The boy she once loved who broke her heart. She must go on a dangerous quest in a world of warring kingdoms, mad kings, and dark magic to find the real killer. But Britta wields more power than she knows. And soon she will learn what has always made her different will make her a daunting and dangerous force.

Sheer Dumb Luck
Britta must be one of the dumbest YA characters. She is constantly making bad choices even after stating it’s a bad choice. She is too emotional to ever have a clear head and think straight to even know what a good choice is and it just puts her in so many bad situations. It’s only by a serious string of sheer dumb luck (which any gambler be thankful for) that she manages to a) make it out of her sticky situations unscathed and b) isn’t dead. Because if she didn’t have so much luck, she’d have died about six times throughout the course of the book.

Predictable & Unoriginal
I was quite disappointed with the plot line of this story because it had potential, but it didn’t hold up to what it promised. Every plot piece was predictable, typical of YA, and unoriginal. All the ‘surprise’ factors for Britta were things I figured out ten chapters before (not aiding her lack of intelligence.) And the points that were intended to be ‘surprise’ factors were items that have been utilized in every YA fantasy novel on the market. All in all, this was just a re-hash of previously published books, leaving me sorely disappointed.

Where’s the Editor?
I hate saying this, but I don’t think this book went through an editor. There were so many scenes where a character would be in one place and then suddenly be in another without having gotten there. Many of the action scenes lacked clarity, making it near impossible to figure out what was going on. And the structure of many of the sentences was so garbled that I’d have to re-read them multiple times just to find the verb. Honestly, the biggest problem with this book was the lack of editing because editing would have fixed many of the problems with this story.

11 thoughts on “{REVIEW} Ever the Hunted by Erin Summerill (ARC)”